A Gartner Analyst and "It's Time to Redefine Data Loss Prevention"

Today, it seems to be in vogue to criticize DLP solutions as out of date, insufficient for modern business needs, and generally out of touch with industry realities.

One of the more notable sources to voice this opinion has been none other than industry leader Gartner.

In an analysis piece entitled “It's Time to Redefine Data Loss Prevention” [1] Gartner goes after the most dominant trends in DLP.   The article asserts that security and risk management leaders need to shift from current trends in data loss protection and “implement a holistic data security governance strategy.”  This is the only way for IT departments to insure “data protection throughout the information life cycle.”

The Gartner write up lays out a nuanced, but ultimately damning case against contemporary DLP.   Note that GTB Technologies customer's were not part of the analysis as the report appears to be about "Gartner Market Leaders".

The summary of their argument looks something like this:

Despite a market awash in DLP solution options, organizations are still struggling with communication between data owners and those responsible for administering DLP systems.  A symptom of this disconnect is that managers are opting for programs that will automate the work of DLP. This has resulted according to Gartner in “technology-driven — rather than business-driven — implementations.”

Another problem says Gartner is that many DLP solution users struggle to get out of the initial phases of discovering and monitoring data flows after the platform is first deployed. The focus on these meticulous tasks means that organizations never realize the potential benefits of “deeper data analytics” or “applying appropriate data protections.”

Lastly, the article points out that DLP as a technology is viewed by users--whether they be individuals or enterprises--as a “high-maintenance tool”, requiring constant attention and a substantial regular investment of man hours.   This ultimately leads to “incomplete deployments” in relation to the systems actual DLP needs.   As a result of all of these phenomenon, says Gartner, companies end up being stuck with systems that require constant fine tuning, and struggle to calculate the ROI on the substantial investments in DLP platforms.

While all of the above points are fair criticisms of contemporary DLP, the approach offered up in the analysis to solve these problems are totally off the mark.   Gartner suggests a total shift in data loss management, moving away from reliance on technology, and instead “sharing responsibility” for DLP between the different constituents in an organization. To achieve better DLP, the industry does not need to run away from technology, but rather incorporate programs that will address the very real problems Gartner has laid out.

GTB’s Smart DLP that WorksTM is a platform designed to do just that.

Using patented artificial intelligence models, the GTB data loss prevention programs use an artificial intelligence based approach to manage sensitive data. This allows the platform to learn and map the network, freeing IT from the tedious maintenance attached to other solutions.    Due to the precision of it’s detection technology, ease of use and quick time to value,  Smart DLP allows processes to be streamlined, instead of bogging down administrators with errors and false positives.

With Smart DLP managers can have their cake and eat it too.   GTB ensures users that security does not come at the expense of efficiency.

Where is the Gartner Magic Quadrant for Enterprise Data Loss Prevention (DLP) 2020?

Zero Trust Data Protection Out with the Old Conventional security models, those based on firewalls, IDS, and the like, operate on the outdated assumption that "everything on the inside of an organization’s network can be trusted".   The contemporary threat landscape facing IT has shown that this is simply not true.   The increased attack…
Read more 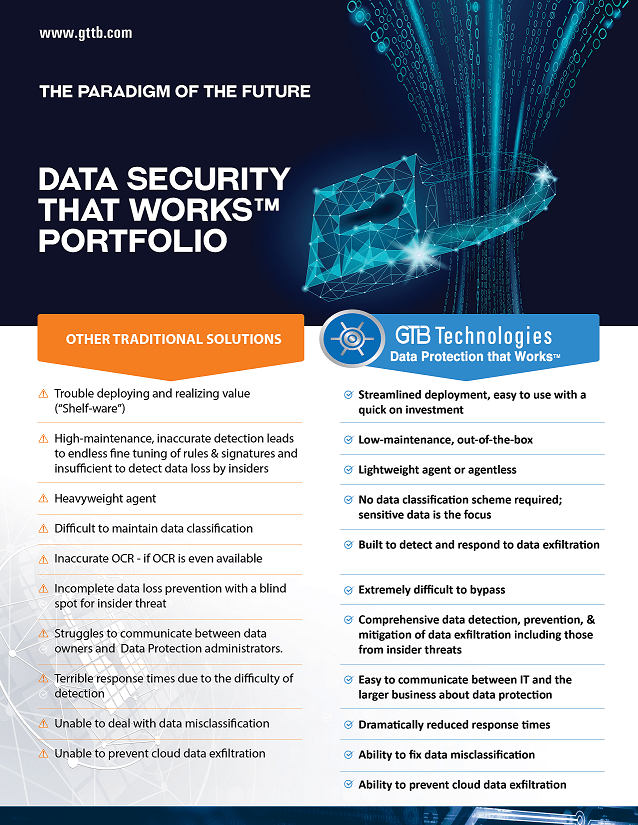 For nearly two decades, deploying Data Loss Prevention (DLP) has been a staple for enterprises seeking to secure their data assets.

Despite being such an important part of an information security strategy, some observers have recently begun to cast doubt on the future of DLP within the industry.   Insider Threat Management and  UEBA (User and Entity Behavior Analytics) providers  market their solutions as 'redefining the post DLP world' even though these solutions are fraught with a high degree of false positives & negatives and will never be able to prevent automatic and accurate sensitive data extrusion. Gartner analysts write

The most common criticisms boil down to the claim that DLP as an approach is obsolete, and the approach to protecting company data needs to be more “specified”, honing in on dangers like the insider threat. Other elements of DLP, such as sensitive data detection and classification, as well as endpoint monitoring, are unnecessary and more importantly don’t demonstrate a quantifiable return on investment.

This is not the first time we’ve heard declarations of DLP’s demise.

Scares like this have popped up several times in past years, only to dissipate shortly after.

Indeed DLP is still one of the fastest growing fields in the IT security industry. The escalating demand for these programs has driven forecasts that show the DLP market continuing its annual double-digit percentage growth for the coming years.   As companies face ever expanding challenges in securing their data, from regulation compliance to diversified tactics by cyber criminals, the need for effective Data Loss Prevention is only increasing.

DLP for the Modern Enterprise

This is not to suggest that conventional DLP solutions are without their drawbacks.

The weaknesses in common DLP programs lie in the way their operational models, using pre-set algorithms and regular expression patterns to determine what “sensitive data” is.  This leads to serious issues in identification accuracy, the key to effective DLP coverage.

Analysts from The 451 Group have written "DLP has suffered from two primary shortcomings: it's generally a challenge to implement, and it does next to nothing to help protect data from outsiders”  hence these DLP solutions need to add additional inaccurate solutions such as UEBA and user analytics.[2]

In fact, a Gartner "leader" of the now defunct Magic quadrant report recently posted on their corporate Facebook page: "Antiquated DLP solutions provide little value.... That’s why we’ve incorporated both UEBA and EDR capabilities into our platform." *,   a basic admission that their DLP system has failed.

It is these weaknesses in traditional models (including many Gartner "Market Leaders") more than anything else that deter companies from investing in complex, intrusive DLP systems, that are also not able to produce efficient results.

Today’s critics of traditional DLP, declaring it an outmoded method, were on to something when they pointed to accuracy as the central challenge to implementing an effective solution. Lack of accuracy means systems are often fumbling in the dark to locate and identify sensitive data, while at the same time producing mounds of false positives that soak up man-hours and company resources.

The DLP solutions of GTB give organizations the assurance of effective DLP without impeding operations or monopolizing resources.  GTB’s smart programs, powered by intelligent mathematics, accurately identify compromising data throughout the entire system. This includes information both on the network and off, including cloud applications and the endpoint including protection against malicious insider or malware-based data exfiltration.

Far from being a relic of the past, as are other DLP and Insider Threat solutions;  GTB’s cutting edge technology gives organizations measurable protection of their intellectual property and total control over their data assets.   GTB's data protection that works platform is the market leader ... all without paying analyst's or agreeing to their misguided opinions in hopes of a 'referral'.